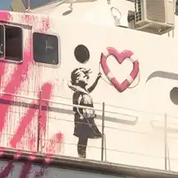 Unfortunately we’ve become accustomed to #EU states ignoring mayday calls so as to avoid making rescues. Read Lea’s story straight from the bridge of the #LouiseMichel, a record of the continued failures of the states #AllBlackLivesMatter Lea Li: Why did we end up in a situation, in which we were not able to move the #LouiseMichel safely anymore? It all started with an official Mayday Relay by the aircraft #Moonbird and authorities that refused to act accordingly.A thread! 1/x https://twitter.com/MVLouiseMichel/status/1299407298360737792