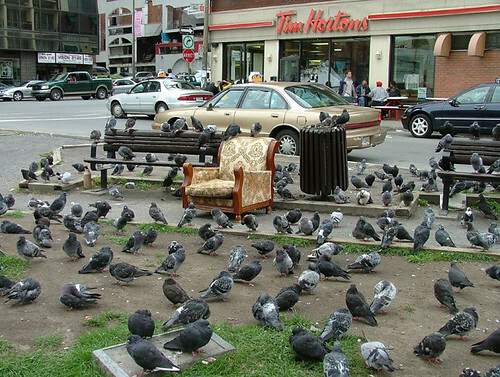 we don't necessarily fully endorse any of these projects, but I think spending time on any of these websites is better for your brain than looking at a lot of groups on Facebook, Telegram, or wherever

a few of our posters are up in the neighbourhood. check https://mastodon.bida.im/@squarebethune for more information

this poster was spotted in the Milton-Parc neighbourhood, to the east of our area of concern. Black Hammer is an organization that has gained quite a reputation for itself on the internet. Here is an article covering most of the recent controversy: https://www.opindia.com/2021/05/black-separatist-group-black-hammer-acquires-200-acres-of-colorado-land-to-create-communist-ethnostate/

we have never seen any other Black Hammer stuff in Montréal, but we think there is good reason to be skeptical of this organization. At the very least, we have to ask what a group whose stated medium-term political objective is to establish a base of operations in the mountains of Colorado has to offer anyone, "colonized person" or not, who is living in downtown Montréal?

we will boost any good critiques of Black Hammer that we see. Please send things our way

a sticker bearing the racist slogan "China Lied People Died" recently appeared next to a run-of-the-mill "Boycott China" sticker, partially covering up one of our posters

this slogan was widespread in our neighborhood - in the form of a spray-painted stencil, not a sticker - last year, probably as early as the summer of 2020

most of the YCL's posters are torn down now. the operators of this account haven't torn down any, despite our disagreement with their approach, because we agree with the central message: Palestine - that is, the Palestinian people subjugated by the Israeli state and the social order it defends - should be free

we prefer this simple sticker. We might not put it up ourselves, but we do not think it does any harm. We also appreciate that it is in English, the common language of this particular corner of downtown Montréal

the operators of @squarebethune are not Young Communists, we are not part of their League. We do not hate them for being young and communist, either, but we disagree with their approach. We believe there are better ways to engage solidarily and strategically with the events in Palestine and/or the local pro-Palestinian movement

it is important, too, that the posters you put up should not be straightforward tools of recruitment into a membership organization

it is unclear what the word "communist" means anymore. It seems to evoke different things depending on your education, your country of origin, your attitude towards tradition and/or conventional authorities, etc.

most of the youth in the streets in Montréal recently, who have upheld the Palestinian cause in a way that occasionally involves putting their bodies on the line, do not call themselves communists. More of them probably call themselves anarchists than communists (although that is still not likely very many people)

the message of "Libérez la Palestine!" is good, and the facts are fine. But most people already know these things - and those who reject them are that much more likely to reject them in this case because these are now the words of "communists"

our neighbourhood has recently been the near epicentre of the latest wave of pro-Palestinian demonstrations in Montréal. In recent weeks, the streets of our neighbourhood, and other parts of the city, have been decorated with symbols of solidarity with the Palestinian side of the conflict between the Jordan River and the Mediterranean Sea

notable were these posters, from the Young Communist League. We appreciate the #freepalestine message. But we must note that these posters did not communicate anything useful to the reader, not even how to contact these communists, because the contact information was half-obscured on most posters we saw around the neighbourhood

Montréal Counter-Information republished our text in English as well. As we said in French, their site is nicer than ours: https://mtlcounterinfo.org/why-we-destroy-boycott-china-stickers/

why does this critic think our third point is "bullshit"?

do they object to the notion that there is an "urgent need for social revolution here and now", or with the assertion that it is legitimate to denounce the Chinese state? or possibly both?

we encourage correspondence and substantive critiques, even from those who defend the local social order and those who believe that present-day China is a socialist utopia. We can be reached at squarebethune@riseup.net

the Chinese version of the text was found and available here:

unfortunately the Chinese version of our text is no longer available. It seems that the other service we used to host the translation (it's https://bin.snopyta.org/) deleted the translation (the fruits of a friend of the project's labor)

we hope we that we can find a copy.

we don't necessarily fully endorse any of these projects, but I think spending time on any of these websites is better for your brain than looking at a lot of groups on Facebook, Telegram, or wherever

a few of our posters are up in the neighbourhood. check https://mastodon.bida.im/@squarebethune for more information

this stencil was bad because it was jingoistic, meaning: it wants war with China. We do not like, support, or trust the Chinese state. But we do not want war, and we certainly do not want ethnic cleansing directed at our neighbours of not only Chinese descent but, in practice, East Asian descent in general

China fucked up on covid first, just like every provincial, state, and federal government in North America has fucked up on covid multiple times since, in one way or the other. We don't care anymore. All of these governments, all over the world, are the problem. Governments act in the interests of the rich, anywhere you go

we need popular power, from the grassroots. Which means involving Chinese people and everyone else, not blaming, denouncing, or inciting violence against them as a group

it's a racist stencil, basically

Do you have photos of the "china lied people died" graffiti that was up all over the neighborhood a few months ago?

no. But if someone has any photos, we will post them.

we often see these stickers in the vicinity of the anti-China and pro-Hong Kong stickers. we believe the same people may be behind all of them

Trudeau is a more relevant problem, but again, the maple leaf that replaces the vowel in this curse word indicates a poor understanding of the issues. Trudeau is an idiot, a dauphin, a racist, and several other bad things, but he is not the problem

the problem is with Canada, and with politicians, and with capitalism and colonialism writ large. These are bigger problems than one man

at the end of the day, we don't disagree with the slogan "Fuck Trudeau", so we leave these stickers. but the maple leaves we cannot tolerate